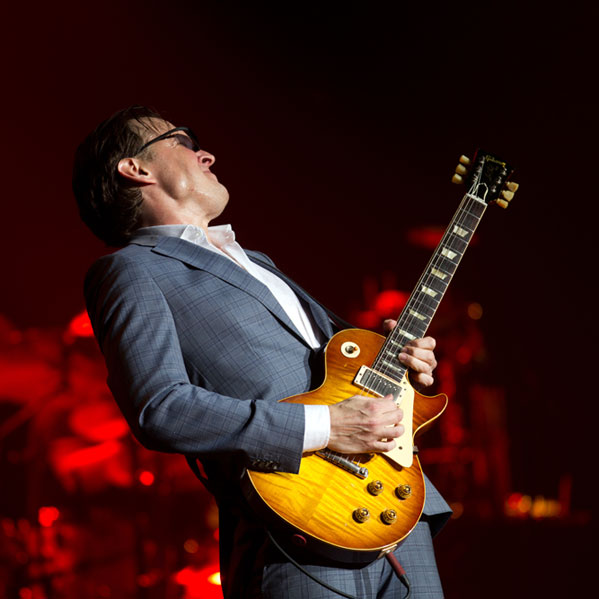 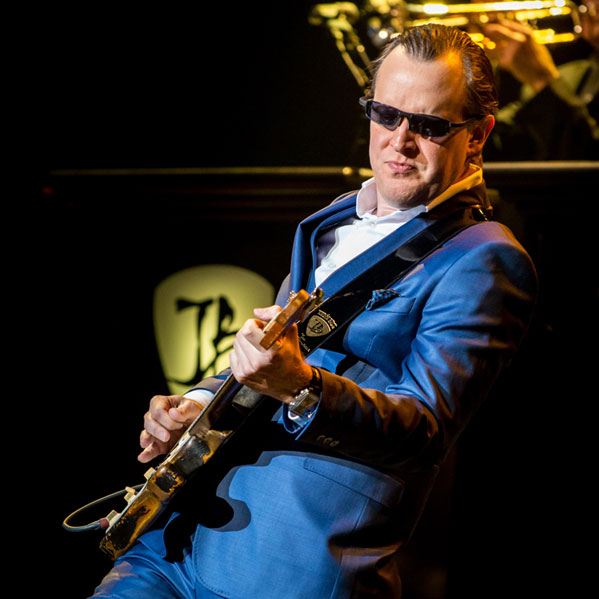 As Joe Bonamassa approaches his 26th year as a professional musician, he continues to blaze a remarkably versatile artistic trail, and amass an authentic, innovative and soulful body of work. Bonamassa’s career began onstage opening for B.B. King in 1989, when he was only 12 years old. Today, he is hailed worldwide as one of the greatest guitar players of his generation, and is an ever-evolving singer-songwriter who has released 15 solo albums in the last 13 years, all on his own label, J&R Adventures.

Bonamassa’s tour schedule consistently hovers at around 150 shows worldwide each year, and a heaping handful of markedly diverse side projects keep him thinking outside the box and flexing every musical muscle he’s got. He founded and continues to oversee the non-profit Keeping the Blues Alive Foundation to promote the heritage of the blues to the next generation, fund music scholarships, and supplement the loss of music education in public schools. There’s a case to be made that Joe Bonamassa, like another star who shared the same initials, is the hardest working man in show business.

In addition to live performances, 2014 marked four major projects: a live DVD/Blu-ray plus 2-disc companion CD from the neo-funk/jazz combo Rock Candy Funk Party which was filmed over three nights at the legendary Iridium Jazz Club in New York City; a live CD/DVD/Blu-ray with singer Beth Hart filmed at Amsterdam’s famed Carre Theatre last summer; and a 4-disc CD package of Tour De Force: Live In London, Bonamassa’s career retrospective recorded and filmed at concerts at four iconic London venues. (DVD/Blu-rays were released in 2013.) To cap off the year, he’ll release Different Shades of Blue, his first studio album in two years and the first of his career to feature all original material. “Sometimes journalists just shake their heads, and ask me ‘Isn’t it risky?’” says Joe. “I say why not do it? Why play it safe? I want to diversify, not just always have it be business as usual.”

It all builds on Bonamassa’s ascendant prominence of the past few years. Recent kudos include his very first Grammy nomination for Best Blues Album, which he earned with much-buzzed-about singer-songwriter Beth Hart for their sophomore collaboration, Seesaw; a #1 debut on the Billboard DVD Chart and Billboard Blues Chart for Live In Amsterdam, Hart and Bonamassa’s first live CD/DVD; twelve #1 Billboard Blues Albums (more than any other artist); a platinum DVD certification for Joe Bonamassa: Live At The Royal Albert Hall; five consecutive “Best Blues Guitarist” wins and a top “Best Overall Guitarist” honour in Guitar Player’s Annual Readers’ Choice Awards, and recognition as Billboard’s #1 Blues Artist, 2010.

Reviewing 2011’s Dust Bowl, Premier Guitar wrote, “Over time, Bonamassa has created his own universe that no longer has much to do with what we think of as traditional blues. It’s movie music for your mind with astonishingly great guitar playing.” Regarding Bonamassa’s 2012 album Driving Towards The Daylight (with guests including Aerosmith’s Brad Whitford), Guitar World called him the “roots-based six-string’s new king of pyromania.” Rolling Stone wrote, “His exacting singing blends with fiery symphonic playing.” In a review for the 2012 CD/DVD Joe Bonamassa: Beacon Theatre—Live From New York, the Seattle Post-Intelligencer said, “He makes every note matter and resonate emotionally. Indeed, he is one of the finest musicians in the business today.”

The first in the queue of Bonamassa’s 2014 releases is Rock Candy Funk Party Takes New York - Live At The Iridium, a live DVD/Blu-ray package from Rock Candy Funk Party, a quartet of world renowned players —album producer Tal Bergman (drums), Joe Bonamassa (guitar), Ron DeJesus (guitar), Mike Merritt (bass), Renato Neto (keys), and Daniel Sadownick (percussion)— who convened for the sheer joy of making music and mutual love of genre-blurring grooves. The package, which follows up last year’s debut album We Want Groove, includes a 30-minute documentary and an exclusive live companion double CD featuring over 100 minutes of music. It includes eight live renditions of original tracks that mash up funk, jazz, and rock with virtuoso musicianship, as well as four cover songs. The band is making their late-night television debut on CONAN in support of it; a selection of songs from the DVD debuted on a November episode of PBS’ popular music performance series “Front & Center.”

Next up is the CD/DVD/Blu-ray of Bonamassa and blues-rock vocal diva Beth Hart’s live performance at Amsterdam’s famed Carre Theatre, filmed in the summer of 2013. The duo toured in support of their Grammy-nominated sophomore album Seesaw, which reprises the powerful dual chemistry they generated on 2011’s Don’t Explain, a collection of ten soul and blues covers that both honours and rethinks the original recordings; classics made famous by artists including Billie Holiday, Etta James, Tom Waits, Ray Charles, Delaney & Bonnie, Bill Withers, & Aretha Franklin.

While Bonamassa is always stretching creatively and looking forward, he also celebrated his story so far in a major way last year. He performed concerts that were recorded and filmed at each of the four London venues at which he had previously played, from the smallest on up: The Borderline, Shepherd’s Bush Empire, HMV Hammersmith Apollo, and The Royal Albert Hall. Each show featured a different configuration of the band, and a different selection of songs from Bonamassa’s extensive catalogue—nothing was repeated. In late 2013, J&R Adventures released Tour De Force - Live in London, 4 DVDs and 4 Blu-rays from each of the four concerts. The companion audio CDs – over nine hours of live material – will be released in 2014.

On September 23 2014, Different Shades of Blue was released featuring all-new, all-original material. To prepare for the record, Bonamassa took 2013 off from releasing any new studio material, a rarity in the tireless bluesman’s career, and instead spent time in Nashville writing with Jonathan Cain (Journey), James House (Diamond Rio, Dwight Yoakam, Martina McBride) and Jerry Flowers (Keith Urban). The result is a record with more of an experimental edge than previous Bonamassa records. It’s a blues record that explores the outer reaches and different sounds that shape the genre.

“It’s been a while since I’ve been involved in the writing on an entire album. I wanted to make a completely original blues album,” said Bonamassa. “I’ve try to push myself to make everything I do better than the last project. I owe it to the fans to give them an original record after all these years.”

His hard work is being rewarded: MOJO gave Different Shades of Blue a 4-star review and called it the guitarists’ “most cohesive and satisfying artistic statement yet.” Uncut echoed that statement - “the best yet and then some from an artist whose vision continues to expand with every release.”

Joe Bonamassa continues to perform live, which is where he’s most comfortable. “No one on the scene today plays with as much passion, finesse and raw talent, has reverence for those who came before him, and has as much passion for his craft as Joe Bonamassa,” wrote Classic Rock Revisited.

In January 2015, he graced a new stage when he headlined a two sold out concerts at the iconic Radio City Music Hall – a feat Bonamassa himself almost can’t quite believe. The result was “Live at Radio City Music Hall” that was released on DVD, CD and Blu-ray in October of the same year.

Bonamassa’s still got a long way to go and will certainly in turn inspire many who come after him as he continues to reinvent himself with a varied palette of side projects—and logs endless miles “dressing up in sunglasses and a suit,” touring the world and growing his legacy as one of the greatest guitar slingers of all time.

Represented in association with Neil O’Brien